So many books. So little time. 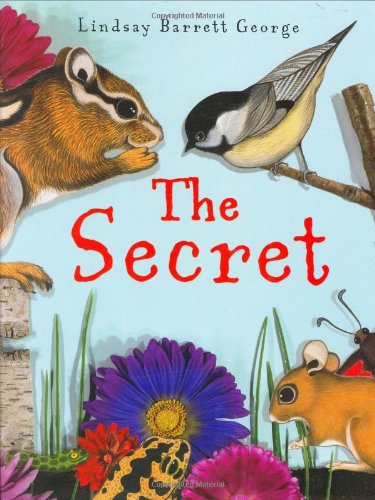 The Secret by Lindsay Barrett George

A question as old as time: can you keep a secret? "Yes," says the listener, but we know the answer is "no". It is always 'no'. A secret is the hardest thing to keep. Lindsay Barrett George takes this simple story as a vehicle for her wonderful lush nature drawings. Drawing animals is her first love, she says in her biography, and it shows in her work.

The story begins with Mr. Snail asking mouse if he could keep a secret. "Yes," says mouse. "Then listen," says Mr. Snail. We don't know what the secret is, but mouse does, and he can't keep it to himself. He only shares it with the beetle. Of course the beetle can keep a secret, but he shares it just once: with the turtle....the story is off and rolling.

The backdrop is rich and varied. "I used sticks as well as bark, moss, silk leaves and flowers, coffee (to simulate the earth) and pebbles to create the artwork for The Secret," says Lindsay Barrett George. The gorgeously drawn animals stand out against this background. The illustrator traces the secret's journey through dots; a perceptive reader would note that with each passing of the secret the dots change color. Also, the verb associated with the animal hints at both the sound (frogs croak) and the species: the beetle pinched it (there are pinch bugs).

The mouse squeaked the secret,

the beetle pinched it, (there are PINCH bugs)

the frog croaked it, (frogs croak)

the moth shook it, (some night-flying moths perform loops and spirals in flight)

the bee buzzed it, (bees buzz)

the caterpillar tickled it, (some have hair that causes skin irritation, dermatitis)

the worm hummed it, (worms communicate with each other by snuggling)

the chickadee sang it, (birds sing)

the cricket chirped it, (crickets chirp)

the snake hissed it, (snakes hiss)

the chipmunk chattered it, (chipmunks chirp and chatter)

the spider clicked it to Miss Snail.

Oh no! It was supposed to be a secret from her? Or was it? Miss Snail turns around and whispers, "Mr. Snail, I love you too."

Short sentences, rich illustrations, will keep even the youngest reader engaged. The longest sentence on a page has 11 words, easy for a young reader to remember. The book can progress from, "read it again" to "I can read it".

A worthy addition to any book collection.